The Soup Shoot was established in 2017 as a fun way to start the outdoor season.  Originally intended to be a frostbite (which is traditionally shot outdoors during the indoor season), we had to change the date to accommodate the football season…  We finally settled on the second weekend of April, and decided on a double Frostbite, which equates to a Stafford – 6 dozen arrows, 30 meters, 80cm target face.

With 45 entries in the first year, and 56 in the second, looks like we’re on a winner! 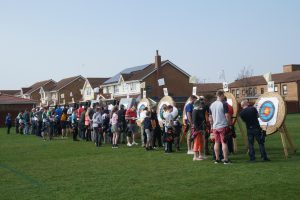 Photography by B Trainer